Have a Question or Want a Free Market Report?

Happy Things To Expect When Moving To Charlotte NC - Video

Why Should You Move to Charlotte NC?

If you're asking this question, "Is moving to Charlotte the right move for you?", then you're in the right place! We all want to be happy, correct? So to answer the question "Why Should You Move to Charlotte NC?", my answer would be from my own personal testimony of moving to Charlotte. Now granted, my escape from the Midwest began with an opportunity in Hilton Head, South Carolina (a little over four hours from Charlotte). Wow! Understand that typically, folks are moving from Charlotte to Hilton Head, not the other way around. But, as I headed into my late 50's, it felt like now or never! To get away from the snow and cold was a dream come true. How about you?

In the course of things, I had met a woman in Charlotte, fooled around and fell in love, and we married. My business enterprise in the Hilton Head - Savannah area did not survive. But I did! So, my reason to move to Charlotte was to avoid homelessness in paradise.

And, while we're here, please remember this. There are a number of amazing beach towns within just a few hours from Charlotte. And every year, I get to pick which of them I want to visit for a few days at a time. Hilton Head Island, Edisto and Seabrook Islands, Folly Beach are but a few. Heading up the SC coastline is Surfside Beach, Myrtle Beach, and North Myrtle. Cross over the North Carolina state line and enjoy Ocean Isle Beach, Holden Island, Oak Island, and the Southport area. And just outside of Wilmington NC is Sea Breeze, Carolina Beach, Kure Beach, and on down to Bald Head Island. Yes, wow! And coming in from a different direction (and a bit longer drive from Charlotte, you'll discover OBX, the Outer Banks!

Heading to an amazing beach to hang out is my kind of happy. And yes, I prefer the beaches of North and South Carolina to the West Coast ones. And you'd be surprised how many clients I've helped move here from the West Coast (Seattle to San Jose).

Why Should You Escape to Charlotte, North Carolina?

Folks up north and in the midwest are asking "What is the coldest month in Charlotte NC?", "Will Charlotte NC be affected by hurricanes?", and "Is Charlotte going to get snow?".

Well, the big news this week was a tornado touchdown in Charlotte and lots of rain that produced flooding. It doesn't happen often, but I'll trade it for the snowy Indiana winters I endured for decades! But to answer the question of the coldest month in Charlotte, that would be a typical January with average highs of 51° and average lows of 31°, and maybe 8 days of rain (that would be snow where you might be right now).

Hurricanes? Charlotte is rarely directly affected by them, but the heavy rain overflow from a coastal hurricane is always something to watch for. During the last one, we got so much rain that we lost a couple of beautiful, large oaks on our wooded lot. Hurricanes are why people often consider relocating to Charlotte instead of the coastal cities of North and South Carolina who take the brunt.

Snow is usually a 1-2 time event in Charlotte each year with about an inch of snow. Sometimes more. Snow today, gone tomorrow (normally).

Not a lot of native Charlotteans, but they are sprinkled throughout the general population. Generally, people from the South and those who move South are nice folks! Warm weather, warm people.

Best Reasons to Make Your Move to Charlotte!

THE THINGS TO DO

- Levine Museum of the New South is my favorite museum. Chock-full of history and a must-do for those relocating here.
-The Billy Graham Library is a top tourist attraction. The gospel is still being preached by Billy here. He was a native son, so touring his childhood home is fascinating, and ending up at his gravesite is touching.
- The Duke Mansion (James Buchanan Duke) is worth your time. When HOMELAND filmed the first three seasons here, it was used as the Vice-President's home.
- Reed Gold Mine, the location of the nation’s first gold discovery in 1799 (not the California gold rush 50 years later).
- U.S. National Whitewater Center boasts the largest man-made whitewater river in the world.
- NFL’s Carolina Panthers play in Bank of America Stadium and the NBA’s Charlotte Hornets, owned by Michael Jordan (local resident) play at the Spectrum Center.
- NASCAR! Nearby Concord has the Charlotte Motor Speedway, home of NASCAR’s only 600-mile race. Plus, in Uptown Charlotte, tour the NASCAR Hall of Fame.
- Find it all at our Chamber's website Charlotte's Got A Lot.

US News says Charlotte's Job Outlook makes it #20 in Best Places to Live in the country. I think it's much better than that because as a real estate agent, I see a lot of people relocating for jobs in the greater Charlotte area. And my business is better than ever before.

Bank of America and Wells Fargo are very strong here, as we are a banking town, for sure. Lowe's is headquartered just to the north of Charlotte in Mooresville. A strong CLT airport and American Airlines are strong employers. I've helped folks in this industry build new homes.

We're also a racing town with Uptown's NASCAR Hall of Fame and Concord's Charlotte Motor Speedway, the epicentre of the motorsports industry.

Well, now, this is a major part of my real estate business. Talk about the perfect place to retire to! The Carolinas, baby. 55+ active adult living in a number of the best retirement communities in the country. Not as hot as Florida, and with four distinct seasons, the greater Charlotte area is a perfect storm for those retiring and relocating. And there's still room for you!

So, if you're moving to Charlotte and want to get to know the area, let's talk! Call me at 704-345-3400 and let's get you on the calendar for your relocation discovery trip here! I'd love to be your agent. 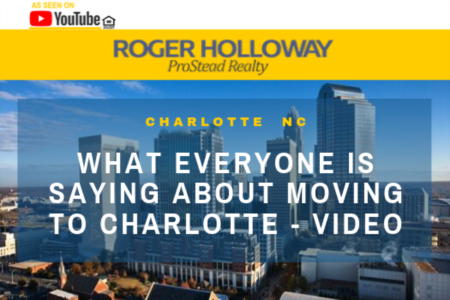 What Everyone is Saying About Moving to Charlotte - Video

What everyone is saying about moving to Charlotte NC is obvious, but no one wants to talk about - until now! Let's get real, ... 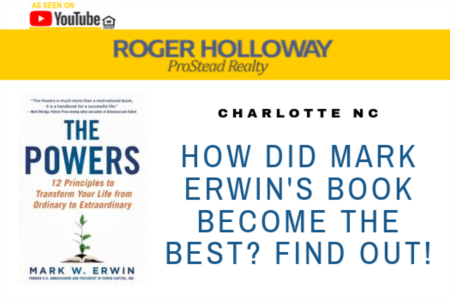 How Did Mark Erwin's Book Become the Best? Find Out! Video

How did Mark Erwin's book become the best? Find out by watching my exclusive YouTube footage of U.S. Ambassador Mark Erwin ...